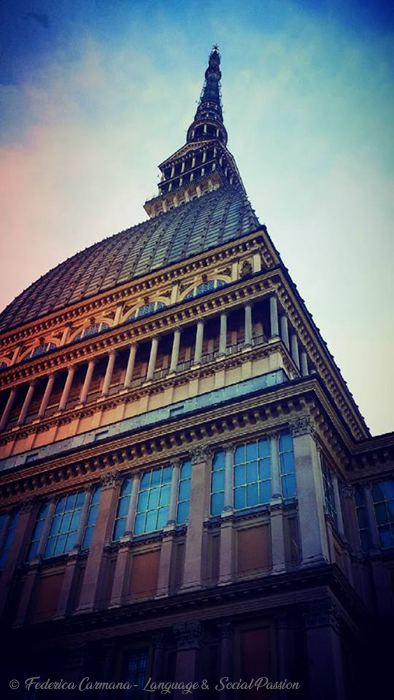 I have long thought of the best article to “break the ice” and inaugurate this new blog, which includes various topics, from Social Media to languages, passing by the teaching of Italian and the services for people who move here in Turin. In the end, I decided to start from this last aspect and to use “a symbol for a symbol”, that means the main symbol of my city for this new beginning.

Let’s start with some facts: it is a building located in the historic center of Turin, designed and built by the architect Alessandro Antonelli, whose construction went on from 1863 to 1889. For decades it was the highest masonry building in Europe, but during the twentieth century it had to undergo major renovations that required reinforced concrete reinforcements and steel beams. Its final height of 167.5 meters remained unsurpassed -by express will of the Turinese and the City Administration- until the second skyscraper of the city, the one that will host the offices of the Piedmont Region that reaches 205 meters, was built (even the other Intesa Sanpaolo Skyscraper “only” reaches 167.25 m), but it is still the tallest building in the city center. Inside there is a panoramic lift, added for the celebrations of the centenary of the Unification of Italy in 1961, which allows you to arrive at the Temple located above the dome, 85 meters high, from which you can admire a beautiful city view. Since 2000 it is the seat of the National Cinema Museum.

But do you know the history of the Mole? I can anticipate that it is very particular … do you have any idea what it should have been? If you know … sssst, don’t reveal the surprise 😉

In 1848 King Charles Albert of Savoy promulgates the Albertine Statute, which grants freedom of worship to non-Catholic religions. And what does this have to do with the Mole, you will probably ask me? Well, as a consequence of the Royal Decree, the Jewish community acquires the land in the current Via Montebello to erect its temple and on December 15, 1862 is signed the project of the city’s synagogue, entrusted to the architect Antonelli. Yes, you got it right: the Mole was supposed to be the Turin Synagogue!!!

But Antonelli immediately senses the possibility of transforming this work into his opportunity for immortality and decides to create something unique, a symbol… to the detriment of the clients. So he begins to make changes to the original project, a building with a 47-meter-high dome, and regardless of the perplexity of the Jewish community raises it further, reaching a full 113 meters!

In 1869, however, it becomes increasingly difficult to appease the clients’ doubts. The work has already started, but the constant changes, and consequently the lengthening of the construction time and the increase in costs, lead the community to stop financing the project and to end the building with a flat roof at 70 meters of height. The construction is then transferred to the City of Turin, which takes over the costs to complete the construction, while the Jewish Community is given the land in the district of San Salvario where is actually located the Synagogue, erected then in 1884.

The construction of the Mole, after further modifications by the visionary Antonelli, ends in 1889, at a total height of 167 meters. Ten years later a Golden Angel is placed on the top, but a lightning strike during a violent storm on August 11, 1904 knoks it down by breaking the top. The Turinese, stubborn, do not give up and, while the Angel is exposed inside the building, the spire is rebuilt with a five-pointed star at the top and a total height of 167.35 meters.

A second violent cloudburst, accompanied by a tornado, on May 23, 1953, breaks the top of the building, knocking down 47 meters (it is a real miracle that neither accident caused victims!)… and again in 1961 the spire is rebuilt, this time with an internal metal structure, reaching the current height of 167.50 meters.

Another small curiosity: a representation of the building is featured on the obverse of the Italian 2 cent euro coin. 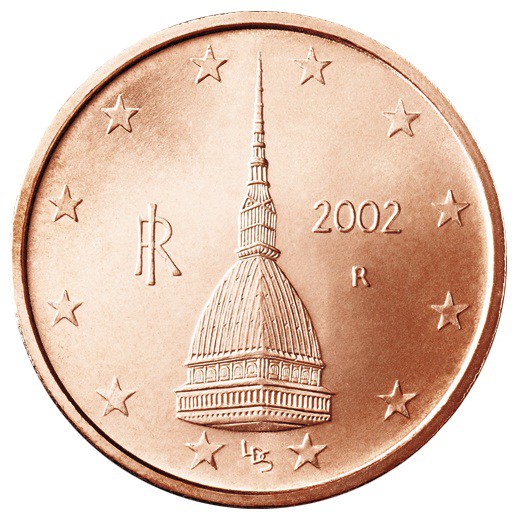 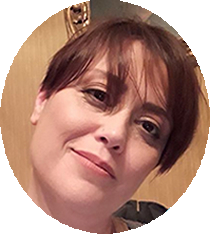